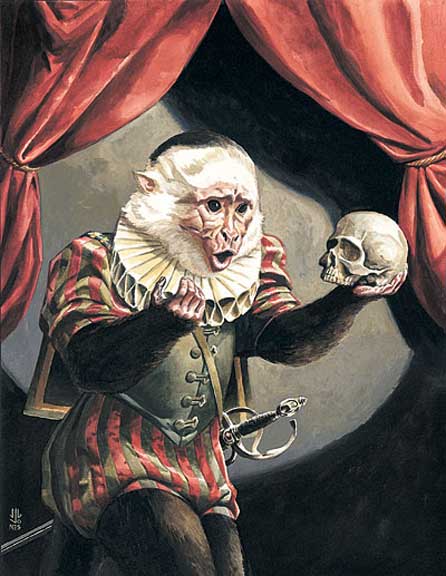 It’s a known fact that if you put three monkeys in a room with typewriters, over time they will produce Hamlet. True, you would probably need to give them some financial resources to hire a director, a crew, audition a cast, find sponsors, apply for grants, and video a flashmob that goes viral which will undoubtedly generate untold dollars in free publicity. But sure, three monkeys could totally produce Hamlet.

[Ed. Note: The author actually loves and respects producers. This is not meant as a slight. Please note that it would take three monkeys to do your job. Also, the author has given no indication whether this Hamlet would be a good production. Let’s leave those kind of judgements to the critics]

Someone told me today that the odds of winning the largest lottery jackpot in the history of the world, estimated at $1.5 billion, was basically the same whether or not you bought a ticket. I’m no mathematician, but I’m pretty sure zero and non-zero are not same thing, in the same way that chicken and marshmallows are not the same thing. They can be similar, but they’re definitely not the same.

Which brings me back to monkeys. Experts have estimated that the odds of winning the jackpot are almost 1 in 300 million. Which is roughly the equivalent of putting three monkeys in a room, giving them phones, and waiting for the first monkey to complete a phone call to one person in the United States and declaring that person is the winner.

It turned out it wasn’t a monkey named Kafka. It was my wife, who told me that I should really get going on another blog post. Also, that she loves me. So here I sit, in a slightly damp, nautical-themed hotel in San Francisco going on about primates and probabilities, all the while sitting next to me on the night table is a folded, slightly crumpled, unexamined Powerball ticket that has lived in my pocket for the past three days.

2 thoughts on “How I Won The Powerball”

Hamlet Love Monkeys Powerball Why are we here?

We are not ok

I can see the sky from my window

Armageddon, Apocalypse, and Me

The history of my toys